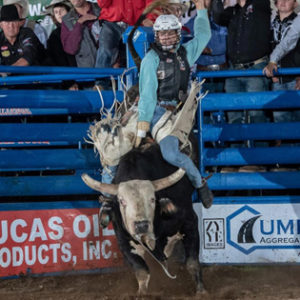 Bull Riding in the Isola Arena

Bullriding, which is intentionally climbing on the back of a 2,000-pound bull, holding on for 8 seconds, emerged from the fearless and possibly fool-hardy nature of the cowboy. Coastal Farm & Ranch Challenge Champions have been producing Bullriding Events since 2009. They have grown from a hometown bullriding venue to up to an over 15 event, 5 states tour of the Western United States!

We also have Junior Bullriders, keeping the future of the sport alive while providing a professional venue for youth to develop and showcase their skills.

Bullriding, which is intentionally climbing on the back of a 2,000-pound bull, emerged from the fearless and possibly fool-hardy nature of the cowboy. The risks are obvious. Serious injury is always a possibility for those fearless enough to sit astride an animal that literally weighs a ton and is usually equipped with dangerous horns.
Regardless, cowboys do it, fans love it and bullriding ranks as one of rodeo’s most popular events. Bullriding is dangerous and predictably exciting, demanding intense physical prowess, supreme mental toughness and courage.

The bull rider may use only one hand to stay aboard during the eight-second ride. If he touches the bull or himself with his free hand, he receives no score. But unlike the other roughstock contestants, bullriders are not required to mark out their animals. While spurring a bull can add to the cowboy’s score, riders are commonly judged solely on their ability to stay aboard the twisting, bucking mass of muscle.

Size, agility and power create a danger that makes bull riding a crowd favorite everywhere. Balance, flexibility, coordination, quick reflexes and, perhaps above all, a strong mental attitude are the stuff of which good bull riders are made.

To stay aboard the bull, a rider grasps a flat braided rope, which is wrapped around the bull’s chest just behind the front legs and over its withers. One end of the bull rope, called the tail, is threaded through a loop on the other end and tightened around the bull. The rider then wraps the tail around his hand, sometimes weaving it through his fingers to further secure his grip. Then he nods his head, the chute gate swings open, and he and the bull explode into the arena.

Every bull is unique in its bucking habits. A bull may dart to the left, then to the right, then rear back. Some spin or continuously circle in one spot in the arena. Others add jumps or kicks to their spins, while others might jump and kick in a straight line or move side to side while bucking.

Included with admission
Scroll To Top